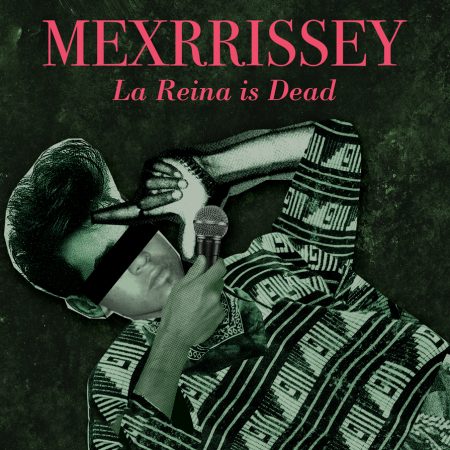 Is there a word for that thing the Church does where they re-write the life of a Saint retrospectively? As in, St. Patrick probably was actually a really great guy, but he probably didn’t drive all the snakes out of Ireland. St. David (my namesake) probably did actually love leeks, but probably didn’t raise a hill out of the ground so that more people could hear him preach. Wikipedia says St. George probably didn’t actually exist, but if he did he definitely didn’t fight a dragon.

I’m here to see Mexrrissey at the Albert Halls in Manchester, in the beautiful renovated Gothic Chapel which used to serve as a Methodist place of worship and now acts as a venue for live music of all kinds. Mexrrissey are a band that I’ve known about for a while, but I’d not really given much time to. The idea’s quite simple: they’re from Mexico City, and they play Morrissey songs, but, in a Mexican style. This, for me, is ideal. I do like some Morrissey songs, but I always wished Morrissey was less involved in them. ‘Suedehead’ in particular I think is an absolute tune, but imagine this – what if instead of the dad rock guitar playing the intro riff, there was a mariachi trumpet? What if instead of having to listen to Morrissey going on about getting laid, the lyrics were in a language I don’t speak so I have no idea what they say? What if instead of Morrissey singing, it’s literally anyone else? Brilliant. The only thing that could make this better is if they played Smiths songs instead of solo Morrissey ones. When I found out they covering the whole of The Queen is Dead, I thought fan-flippin-tastic

Maybe I’ve made this word up. I’m Googling vaguely saint-related words to see if I can figure it out. ‘Beatification [noun]: the official act of the pope whereby a deceased person is declared to be enjoying the happiness of heaven, and therefore a proper subject of religious honor and public cult in certain places.’ That’s not quite the word I’m after but it’s sort of close to it?

So that’s where I am now. I’ve brought my dad along too, who’s been listening to The Smiths since long before I started (mostly the debut album The Smiths when he was in college, he tells me), and the room is, predictably, steadily filling with Dads. It’s quite a mixed crowd really, but I think Dads are the one demographic that stands out above the rest. One Dad to the left of the stage is wearing a sombrero. The band hasn’t even started yet and I can hear someone behind me shaking an egg shaker. I do wonder how many people here are diehard Morrissey fans who would defend him to the death, and how many are actually feeling quite embarrassed to be here, publicly associating themselves with Morrissey. It’s probably not quite that binary. He’s been a terrible person since before I was born, and he’s getting steadily worse over time. Last week he once again outdid himself with a wide-ranging interview on his website – “as far as racism goes, the modern Loony Left seem to forget that Hitler was left wing!” (in case there’s any doubt, Hitler was very much right wing) – and once again I felt myself squirm as I tried to reconcile this with my love of The Smiths. It’s quite common to hear people say how much they love The Smiths, and then quickly follow it up with “but not Morrissey though. Obviously he’s terrible”, to just clarify that though they love The Smiths, they’re not a massive embarrassing racist like Morrissey (although as I’ve said elsewhere, I think The Smiths might have been so good exactly because Morrissey is such a terrible person)

In Neil Gaiman’s book American Gods, the main cast of characters are the gods of myths and legends from across the planet, all struggling to survive in modern North America, where they have been brought by the migration of their believers. Their power in North America is directly linked to how many people still believe in and worship them. The shape these gods take is also directly linked to belief in them. In the later chapters of the book (no spoilers), the protagonist goes to visit the home country of one of these gods, and the version of that god that he meets is hugely different to the one he encountered in America.

Mexrrissey’s website has this to say about Morrissey: “In Mexico Morrissey has always been a prophet with honour. His songs of love, loss and longing, with powerful imagery and metaphors have found a huge audience and chimed with generations raised on rancheras and mariachis and their singers who were not afraid to cross the line.” Morrissey may be a prophet with honour in Mexico, but here he’s the uncle everyone has ended up having to delete from Facebook.

The band enter the stage – they’re actually a supergroup of very famous Mexican musicians, including Mexico Institute of Sound producer and DJ Camilo Lara, psych rock frontman Sergio Mendoza, and veteran punk singer Ceci Bastida. They’re all wearing t-shirts with ‘Mexrrissey’ across the front, and pants with distinctively Mexican-looking stitching down the side. I wish I knew enough about Mexican culture to give more details. I feel the same as they start playing, with opener ‘La Reina is Dead’ (‘The Queen is Dead’) – I know the rhythm sounds very Mexican to me, but what is it about the rhythm that makes me feel that? Unfortunately I don’t have the time or the presence of mind to dissect it, I’m too busy enjoying it – there’s something about the whole thing that is very, very funny to me. Camilo Lara addresses the audience after the first song: “We are a bunch of guys who came from Mexico to MANCHESTER to play you songs! We’re probably more crazy than you. You have to prove you’re more crazy than us.” Reader, I regret to inform you the crowd are not more crazy than them. They’re sort of bobbing a bit but have ignored Lara’s earlier request, “everybody jump!”. I feel like they were expecting more from The Smiths’ hometown.

I remember when I was about 16 the words to the Catholic mass changed. When the priest said ‘peace be with you’, the congregation were now to say not ‘and also with you’, but ‘and with your spirit’. I only really go to mass on Christmas Eve now (and mostly for the hymns) but I still can’t get it right after 8 years.

The visuals accompanying every song are fantastic – animated interpretations of the lyrics to every song with (obviously) a Mexican twist. For the songs where the arrangement is so changed it’s not entirely clear what’s being covered if you don’t speak Spanish, it feels a bit like a game of Catchphrase – there’s a clue in the animation, but I can’t quite figure out what. Currently it’s an animated hand poking a cactus, and big animated drops of blood. Say what you see. It is, of course, ‘El chico de la espina clavada’ (‘The Boy With A Thorn In His Side’). Their version of ‘Never Had No-One Ever’, ‘Nunca James’ (which Google translate is telling me translates to ‘Never James’ for reasons my Spanish isn’t good enough to grasp) has an animation of a duck with a Morrissey quiff wandering morosely around a city. 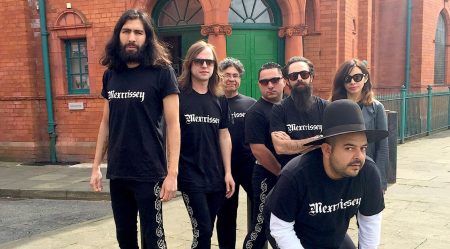 The sombrero is thrown onto the stage. “That’s a nacho dispenser”, says Lara. “In our gigs in Mexico, we have had people giving birth! People taking crack! People naked! You will have to be crazier than this, Manchester!” Manchester are still not crazier than this. Their version of ‘Some Girls Are Bigger Than Others’ is ‘Hay Unas Mas Gorditas’ – ‘There Are Some More Chubby’. After the song, Lara tells us ‘gorditas’ are a kind of food in Mexico, so the lyrics are actually very funny. I wish I spoke Spanish so that this too didn’t go completely over my head. The average Spanish level of the audience is clearly quite low. There are several points during the gig where I can only just hear the band over the audience, who are belting out the lyrics in English. This is clearest when the band try to do call and response with the audience. The singer patiently sings a phrase in Spanish, and holds the microphone out to the audience. ‘THERE IS A LIGHT, AND IT NEVER GOES OUT’ they scream back. Repeat to finish. The visuals for this song are a montage of prayer candles with Morrissey on them in monk’s robes, hand outstretched, a halo round his head.

I think the word I’m looking for is sort of ‘rehabilitation’? ‘The action of restoring someone to health or normal life through training and therapy after imprisonment, addiction, or illness.” I think that might be as close as I’ll get? Like that, but for saints.

Towards the end of the song a man climbs onto the stage with a huge Union Jack, which he appears to have sewn ‘THERE IS A LIGHT THAT NEVER GOES OUT’ onto. He proudly waves it over the audience. The band drape it onto the drum kit. I’m not really sure what it’s meant to mean, but I feel a bit queasy about it in the context of Morrissey’s not so subtle leanings towards white supremacist vibes recently. One of the band’s encore songs is ‘Panic’ (‘Panico’) – the visuals for this are, hilariously(?), Morrissey beating a Trump piñata with his trademark flower bouquet. Morrissey has, to be fair, said this of Trump:

Asked “if there was a button here and if you pressed on it, Trump would die dead – would you push it or not?,” Morrissey replied: “I would, for the safety of the human race. It’s not for my personal opinion of his face, or his life, or his family, but in the interest of the human race. I think he’s a terrible, terrible scourge.”

But here it feels completely incongruous. It feels a bit weird to be celebrating possibly the only agreeable thing Morrissey has said in the last decade (‘Donald Trump is bad’) with all the terrible shite he’s come out with recently. But then again this must be the only way some people can cope with the awful reality of Morrissey. I suppose this is how cults start. In a thousand years perhaps all the history books will tell of how Morrissey was a great hero, who single-handedly destroyed Trump’s wall brick by brick, and finally triumphed over the blasphemous Marrites after the great schism tore apart The Holy Quaternity. Morrissey will become two people, the indie hero who soundtracked countless adolescences worldwide, and the real one who is even as I speak probably drafting a press release announcing another terrible opinion about immigrants. Mexrrissey are the first step towards a post-Morrissey future. Morrissey is dead, long live Mexrrissey.

I sent my dad this review to read over, and he said the word I’m looking for is ‘hagiography [noun]: a very admiring book about someone or a description of someone that represents the person as perfect or much better than they really are, or the activity of writing about someone in this way.’ Cheers dad!