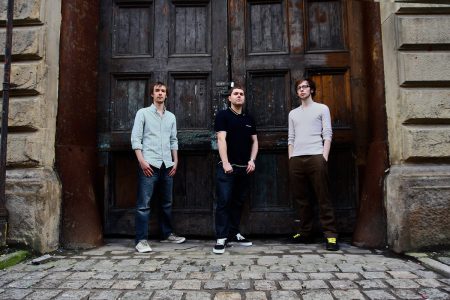 Perspective is an important thing. I’m at the front of Gorilla with my friend Eve, waiting for the support act to come on for tonight’s GoGo Penguin gig, and am trying to take my notepad out of my bag so I can remember things for this review (which you’re reading now, bloody hell I’m sorry I didn’t mean to get this self-referential so early on). I apologise to her for having to be seen in public at a gig with such an obvious nerd. But then I remember that the last time I saw GoGo Penguin, just across the road at the Manchester Ritz, was the day Trump was announced as US President, and in the grand scheme of things my notepad doesn’t seem so important. Nonetheless it’s hard not to feel a little self-conscious looking around the crowd – tonight’s gig is sold out, and I can’t see anyone else in the crowd with a notepad. Their loss if you ask me.

We’re standing right behind the piano to the left of the stage – on the opposite side sits a drum kit, and I can’t really see what’s in the middle but I’m assuming a double bass is lying down on stage. I’ve had trouble describing GoGo Penguin to people before. ‘They’re like… a jazz trio? But sort of intense? Like… they sort of sound a bit like dubstep sometimes?” was probably my weakest attempt. Their website says “hard-hitting jazz meets electronica”. That sounds more accurate. They’ve played at Matt & Phred’s, Ronnie Scott’s and jazz festivals around the world, and released an album on legendary jazz label Blue Note, but also have a reputation for having influences from all over the place. There’s an interview with them online that calls them “pumping future-jazz built for the rave generation”. Blimey. Heavy stuff. Couldn’t put it better myself. I can see double bassist Nick Blacka’s effects board in the middle of the stage, and it’s as full of pedals as that of your standard shoegaze guitarist. In contrast, the piano in front of us has a stack of towels on it, presumably to wipe up the sweat from any particularly intense piano playing. That’s how you know you’re in for some pumping future-jazz built for the rave generation.

Pumping future-jazz will have to wait though – first on is Jens Kuross, who’s playing for us tonight sitting behind a keyboard with a range of effects pedals sitting on top. He introduces himself but it’s not quite audible over the crowd. When he does start playing, things quieten down quickly. His first song is classic jazz songwriting on what sounds like a Rhodes electric piano. There are some particularly juicy jazz chords, which he is visibly savouring – on one chord right before the end, he makes a face which I can only truly describe to you by telling you to go and type ‘solo face’ into google images. It’s measured, well-paced music with some very satisfying tensions and resolutions. It’s all tinged with a subtle electronica, like there’s a big glowing reverby cloud over the music, which is a great compliment to his husky voice.

The second song begins with him triggering a pre-recorded sample, and for a few excited seconds I’m sure this is actually the beginning to Talking Heads’ ‘Once In A Lifetime’ and he’s about to launch into a cover. This is not the case, he’s actually playing his own song ‘Steadier’ (skip to 0:50 if you want to hear where my Talking Heads confusion came from), which is again a pleasing wash of electronic effects and drum machine beats around jazzy songwriting idioms. Eve describes him as sort of like a “jazz Chris Martin.” I’ll leave it to the reader to decide whether she meant that as a compliment or not.

Between songs he apologises for the awkward silence while he “adjusts the tempo”, which he calls “very John Cage-esque”. He says he knows he’s in the right room if people get his nerdy music jokes. He then compliments the audience for coming to see a band with “real instruments” – “who knew that that was a novel, cool thing?”. I think he may have misjudged the crowd here. I’ve been thinking recently about whether Ruby Tandoh’s approach to food can be applied to music. Since she appeared on Great British Bake Off, she’s been an outspoken advocate of positive, enthusiastic, shame-free approaches to food. Just this week, she tweeted, “we need to stop scaremongering about ‘ultra-processed’ foods (literally just foods made from other processed foods) and stop idealising ‘natural’ foods as though naturalness is some intrinsically good and healthy and moral thing.” I could say the same about the wobbly divide between electronic and instrumental music. Neither one of them is intrinsically good and healthy and moral. People make and listen to music for all sorts of reasons. I’m not saying all music is straightforwardly good in itself – music can have all sorts of effects, and they’re not all good. Music can be used as propaganda, as a sonic weapon, as torture, as a way of reinforcing damaging ways of thinking and attitudes (looking at you, classic example ‘Blurred Lines’) but mostly it’s serving a purpose that’s straightforwardly joyful and satisfying in people’s lives. And it isn’t like it’s a fight between the instrumental and the electronic worlds – you can quite easily be a fan of both, enjoy them for different (or similar) reasons, and get different (or similar) things out of them, as GoGo Penguin themselves are a great example of. The singer is now telling us to “give [our]selves a pat on the back” for coming to see live music. I take it upon myself to take a tiny stand against this kind of arbitrary moralising, and do not pat myself on the back, for which I expect a Nobel prize nomination in the post any day now.

The singer then makes a reference to the fact he’s about to turn on a drum machine, betraying his instrumental allegiances, and it’s hard to judge how tongue-in-cheek this was. I begin to question whether or not he actually meant everything he just said or if I’ve misread his tone. Eve seems to think he meant it too though. He finishes his set and thanks the audience, telling them “it’s a privilege to be listened to”, which on the other hand is a statement I wholeheartedly agree with. 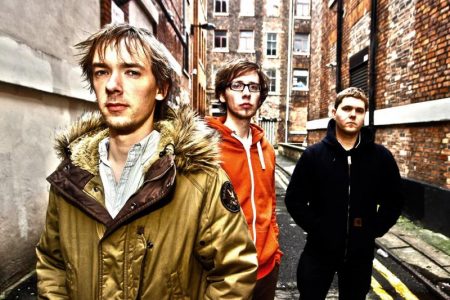 GoGo Penguin take to the stage calmly and quietly. This is something I’ve noted when I’ve seen them in the past – everything about their stage presence is restrained and understated, and at the same time, confident and assured. They begin with ‘Raven’, single from their new album. The song opens with block piano chords swimming in reverb, which would sound equally at home on a house track in a club as they would here on this stage. There’s a slow swell with an atmospheric build up on the bass, and then everything kicks in. We’re firmly in thumping future-jazz territory now. There’s a man just to our left filming the song on his phone. I wouldn’t mind but he’s left the light on, and he’s shining it into my eyes. My notepad feels less annoying now. After the second song, Blacka greets the audience, and jokes of the set, “I’m sure you all know [these songs] really well; they’re from our album that came out two days ago.” There’s something very majestic and dignified about him standing there next to his double bass calmly addressing the audience, but in a very self-effacing and unassertive way. It’s quite a refreshing contrast to the intensity of the music.

What always strikes me about GoGo Penguin’s music is the amount to which everything seems like it’s constantly about to explode past its limits. I think about ‘Once In A Lifetime’ again – according to a post on his social media accounts a few weeks ago, David Byrne’s notes on the video asked for it to be “tight little bundles of squirming intensity… bursting at the seams but placed in an orderly composition.” Everything about GoGo Penguin’s performances, when they’re in full flow, seems like they’re about to burst at the seams. 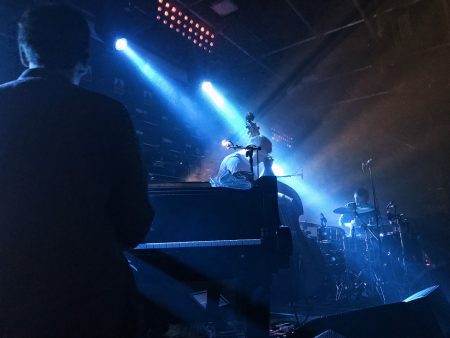 There’s a piece of music research delightfully called ‘Syncopation, Body-Movement and Pleasure in Groove Music’, which tried to find out what exactly it is that makes people enjoy a rhythmic groove, and makes people want to dance to it. The study concluded that people mostly enjoy a rhythm when it’s somewhere in the space between a straightforward, simple 4/4 beat and complete rhythmic chaos – just simple enough to recognise where the beat is, but just rhythmically complex enough to be pushing at the edges of what your brain is able to follow. According to this research, Groove is, sadly, not In The Heart, but At The Apex Of The Inverted U-Shaped Curve Observed When Syncopation Is Plotted Against Self-Reported Ratings of Wanting to Move. The interplay between piano, bass and drums is the best example of this I know – everything about what they’re doing feels like I’m at the edge of what my brain can follow. I remember thinking last time I saw them that it was like standing in front of a giant wind machine directed into my face for the duration of the set. But instead of wind it’s pure pumping future-jazz. It’s not all like this – there are some stunningly beautiful sections which contrast completely, where everything calms down, sometimes with bowed double bass from Blacka, sometimes with subtle percussion effects from drummer Rob Turner and sometimes with some really beautiful piano playing from pianist Chris Illingworth. Everything feels balanced.

Before their final song, Blacka talks to the audience again, and thanks everyone involved in the gig – the crew, the sound man, the tour manager, the support, and everyone else. It feels like he really does appreciate that it is a huge privilege to be up on this stage, and that privilege is supported by everyone in the room – the musicians, the crew, the audience, the whole infrastructure of people that support live music events, and the way he speaks conveys a quiet respect for that. They start playing the final song in the set, ‘Protest’, another high-energy piece with a bassline that could be out of a grunge tune. The guy with the light on his phone before is very excited about this and starts filming again. Now he’s moved round in front of me and is shining his light directly into the bass player’s eyes, which isn’t an equivalent display of respect if you ask me. The woman he’s with has now joined him in front of me and is dancing a bit too violently for my taste with her bag whacking into me and Eve several times. The notepad is really fine isn’t it. I look around the room and there are similar responses across the audience – there’s a guy with his hand in the air, head down, eyes closed, having a similarly religious-looking response to the one I observed when I saw Nick Cave last year. The rest of the crowd moves along to the music in steady pulses. The woman tries to take the hand of the man having a religious moment and pull him into a partner dance, but he turns her down with a polite grin. When the band leave the stage, I consider trying to grab the setlist from the floor but somebody else gets in there first. I briefly consider nicking a towel instead but that seems a bit far for a souvenir. Maybe that’s a better description than ‘jazz but sort of like dubstep’ – jazz so intense that the pianist needs a stack of towels. Perhaps not. I’ll leave that up to you.