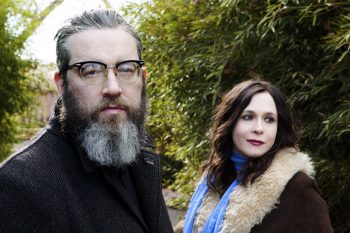 Last week, this picture popped up on my Facebook feed. In short, it recycles an old and often repeated claim about what the very highest level of musical taste is – that is, to like “everything except rap and country”. I’m going to have to leave that extremely dodgy sweeping generalisation about rap aside for now, because it’s country music, not rap, that I’m here to listen to tonight. But this is not just any country music. We are, after all, at the RNCM, distinguished Conservatoire, and host to high art luminaries from around the world. This is fancy country music.

I’m here to see Brett and Rennie Sparks, husband and wife alternative country music duo, who release music under the name The Handsome Family. While I wait for my uncle Mark (the most handsome family member I could convince to come with me) to get here , I ask the two friendly women who have asked to share my table in the RNCM café how they heard of The Handsome Family. Their first encounter with the music was through creepy American crime drama series True Detective. The Handsome Family song ‘Far From Any Road’ was the theme tune to series one, and was a perfect fit – sinister, swampy, gothic Americana. I suspect this story is the same for many people here, although the band had had a cult following long before this. Looking around the café, there are plenty of typical “country music fan” signifiers about – flannel shirts, indulgent beards, and, pleasingly, both trucker and cowboy hats. I think back to the Facebook meme and wonder what it is about The Handsome Family that sets them apart from your typical country band.

My uncle Mark and his sister, my mum, are largely the reason I enjoy country music, although I often think of my taste for country as something akin to Stockholm syndrome. On some level, I believe what the memes tell me, and am aware much country music has a lot to answer for. But on another I find it deeply satisfying. Both Mark and my mum got into country music through The Eagles when they were younger, then moved onto the harder stuff as they grew up, and country music was playing constantly around the house and on car journeys when I was growing up.

Support act Courtney Marie Andrews is proof this reputation isn’t quite justified. She looks and sounds straight out of the ‘70s hippy country scene, with a long flowing dress, a flower-embroidered guitar strap (I think? That’s what it looks like from this distance anyway), and a beautiful, soaring voice. She’s joined by a stoic pedal-steel guitarist who looks like he’s achieved nirvana, a white man dressed in black with long dreadlocks and a serene look on his face. It’s a lot easier to see the appeal of country music faced with bands like this. Mark, who knows what he’s on about when it comes to country music a lot more than I do, is thoroughly impressed. 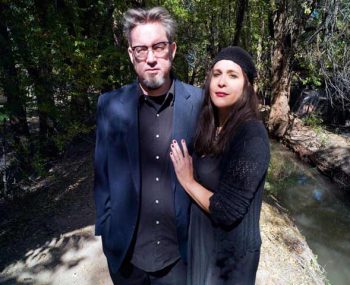 The Handsome Family are a bit different. It’s hard to find the words to describe exactly how they come across on stage. It’s sort of like two Disney baddies got bored halfway through a film, quit, and decided to start a country band. Or perhaps lost a bet and were forced to start a country band. Or were captured by the authorities, and as penance for their terrible crimes, were made to do time playing in a country band. Brett Sparks in particular, with his booming bass-baritone voice, looks like he was meant to be the villain in a Wagner opera and got lost on the way to the stage.

Two things stand out about the band’s live performance – they’re both very, very funny, and very, very creepy.  Rennie, who has a sideline writing dark short stories, writes the lyrics, and Brett, who studied as a music historian, writes the music. Rennie leads the talking throughout, and could easily have been a standup comedian in another life.  The crowd spend a great deal of the space between songs (and during) laughing very hard. On the other hand, I don’t think Brett and Rennie laugh once during the gig. They remain completely deadpan as they make light of the music, each other, and the fact they’ve both got bad throats and are chugging Chesticough throughout the gig. At the same time, the gig is shot through with an unexpected touch of the macabre. At one point near the end of the gig, Brett starts discussing how he doesn’t like guns, and then from nowhere shouts, “BUT KNIVES ARE GREAT!”. The music too jumps between very funny and very dark – compare, for example, Back In My Day, a sarcastic nostalgia song, with My Sister’s Tiny Hands, a straightforwardly dark tale of death and woe.

Brett has said that the band’s song ‘Drunk by Noon’ is “a drinking song and an anti-drinking song at the same time.” The Handsome Family are perhaps best understood as a country band and an anti-country band at the same time. There always seems to be a layer (or maybe several) of irony over what they do. The band have said an audience member once told them, “I know you’re making fun of something, but I’m not quite sure what it is.” It feels like the whole thing started one day with them saying to each other “wouldn’t it be funny if we were in a country band?” and everything got out of hand – but at the same time, they write what on the surface are deeply sincere and beautiful songs.

A friend of mine wants to walk down the aisle to a cover of their song ‘The Giant of Illinois’. The two positions – ironic and totally sincere – aren’t as mutually exclusive as they might first appear. In fact, some people (taking inspiration from a school of thought which has improbably been brought to public attention by Shia LaBeouf, in collaboration with artists Luke Turner and Nastja Säde Rönkkö) think this is actually just how popular music functions now. Aimee Cliff has described this as “all the ironic distance and excruciating self-awareness of postmodernism with all the open-spirited capacity for enjoyment that came before. It’s about being enlightened and also light. […] We feel attached to it and we also stand apart from it […] We’re able to enjoy and to criticise at the same damn time, without either response diminishing our capacity for the other.” It’s often hard to tell when The Handsome Family are being sincere and when they’re being ironic, but perhaps at times there’s space for both in their music.

Rennie ends the night by thanking the audience for being so polite, and pointing out the RNCM is a fancy venue – “In America, we normally play in pizza places on half-off-slice night”. She adds ominously, “tell no-one what you’ve seen here tonight”. I’m pretty sure she was joking, but I’m half expecting a knock at the door after this review is published. If I mysteriously go missing, let me just say on record you should probably check the whereabouts of The Handsome Family around the time I was last seen. At least if I do I might stand a chance of making it onto their next album.